Recording Won't Transfer from my Apple Watch to my iPhone 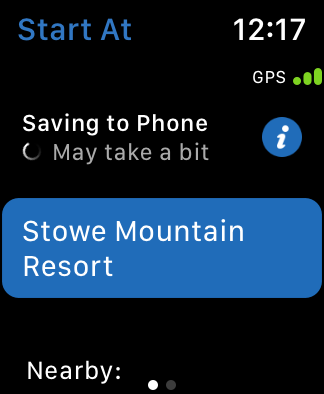 Just to add to the confusion, your workout may appear in Apple Health and the Fitness app right away! This is because Apple prioritizes health data above app file transfers. So don't panic, this is totally normal.

Slopes on Apple Watch will keep trying to send the recording automatically for you, so if it doesn't show up right away it should appear within an hour or so of getting back on WIFI.

If This Doesn't Work?

At any time, you can hit that "Saving to Phone" on the Watch to get an option to force-retry the send. We're still at the whim of watchOS's "smarts", but if you're back with both devices on WIFI and aren't at <10% battery it should happen within a minute.

99% of the time, that simple retry when you're home will get things all fixed up. However if that doesn't work, sometimes watchOS just gets "stuck" and never sends the data over. Restarting your Watch (hold the big button in for 5s and you'll see the option) or sometimes your phone, and then hitting that "Saving to Phone" option in the app one last time should resolve the issue.